We have started to dispatch our small orders.

Choose your delivery date.  January or February will give time to chit and plant in March or April.  See  FAQ for full details.  For all EU AND Northern Irish Customers please pick a day before the end of December as we cannot guarantee delivery in the event of a no-deal Brexit.

**WE HAVE TABLE / EATING POTATOES AVAILABLE FOR IMMEDIATE DISPATCH ** 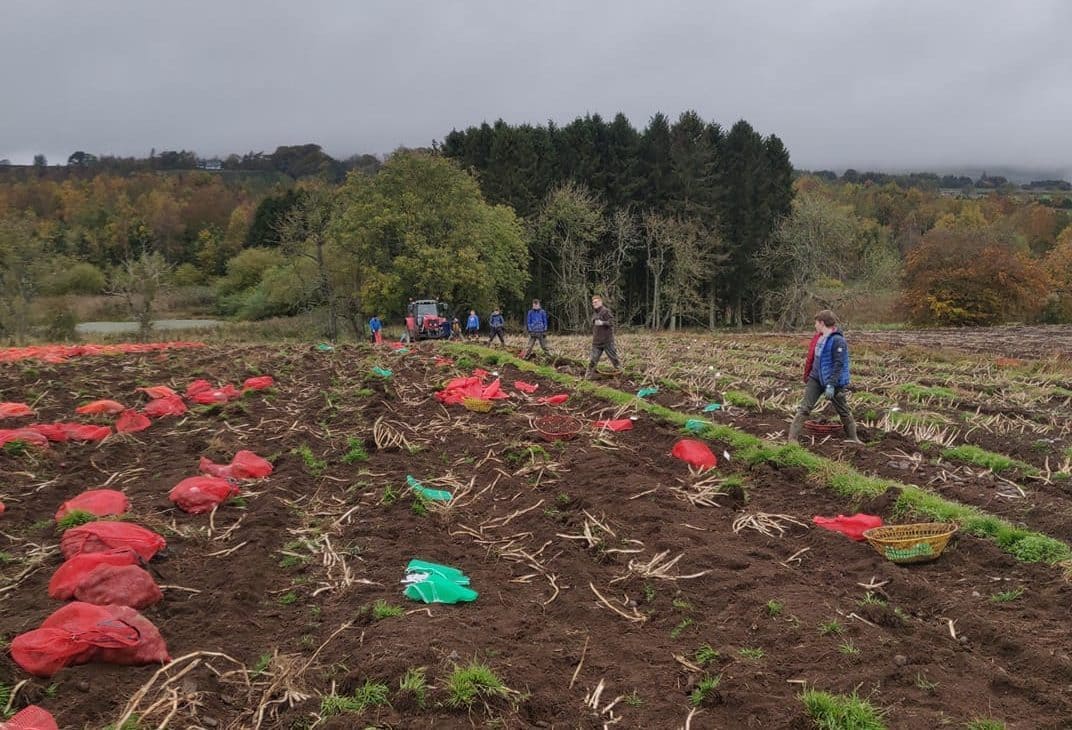 No half-term in Scotland

In Scotland, there was never a half term from school in October. We have always had the “tattie holidays” where the local kids would have the back-breaking task of picking potatoes in October for the local farmers. Farmers’ kids were especially lucky as their holiday could be officially extended if they were still needed to help out. Modern machinery has taken over and large fields can be completely harvested before the children from yester-year would have been been sitting down to their mid-morning “piece”. The school letters are slowly trying to change our terminology, but it will take a long time, especially in rural areas, for the words “half-term” to trip easily off our tongues.

Each year Skea Organics (our parent company), have trial plots where we have to go back to basics and use smaller machinery. The mesmerising video shows the basic lifting machine, hardly recognisable to the modern-day harvester, which runs on the same principle but is 100s of times the size. The nostalgic feeling is also helped by having children working by picking potatoes and bringing their own lunch – we think that our potato-lifting crew may be one of the very few working in fields this year. They really enjoyed it though – well they kept coming back for more which is hopefully the same thing.

Often we are asked about the tomato-looking thing that can grow on the potato plant after flowering. This is the true potato seed – and is the result of cross-pollination between two potato plants and if grown would be different from both parent plans. However in order to grow these, it would take several years of luck and you may not end up with an edible potato. Potatoes do not need to flower or to have their flower pollinated in order to grow the next generation (unlike most vegetables). The next generation comes from tuber growth and is identical to the parent.

Our on-going breeding programme is in conjunction with James Hutton Institute in Dundee where cross-pollination is done in a controlled way to ensure we know what has been crossed with what. The entire process takes years as the new potato will need to go through a variety of tests before being good enough to get it registered on the national database.

This year we had over 800 plots at various stages of selection, which includes control plots and these have to be carefully monitored, documented and of course kept separate. Each potentially could be the next best potato that you will be eating in a few years time! However, many will be discarded along the way. Our main aim is focused to blight resistant and tasty varieties – but the first cut will be how they look – and this can be a gut feeling from when they come out of the ground. We do not know what to expect, especially with the coloured varieties; will the colour be as we imagined. For example, is the result when we crossed a good blight resistant variety with a purple variety what we thought it would be.

The kids were all sent away with some potatoes to try – they will be eating something that no-one else has. Taste-testing is the perk of the job!

We are always after new varieties and within our breeding programme we try to find potatoes not only for the commercial market but also interesting for small gardeners and allotment growers. So far our only registered variety is Mary’s Rose, however we have a wave of new red and blue fleshed varieties in the pipeline as well as more disease-resistant white and cream fleshed varieties.

Background information about our breeding progrmame can be found https://potatohouse.co.uk/about-us#breeding 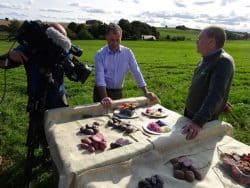 Andrew having the best day ever! Talking tatties to a fellow potato enthusiast George Anderson from Beechgrove Garden. The team came to chat about our breeding programme, potatoes in general, coloured potatoes and enjoyed the homemade crisps on offer!

Beechgrove is a hardy annual TV gardening series which sets out to deal with, glory in and celebrate Scottish horticulture and growing conditions.

Beechgrove is and always has been a firmly practical, get-your-hands-dirty gardening programme which delights in success but also learns from failures in the garden and never takes itself too seriously. 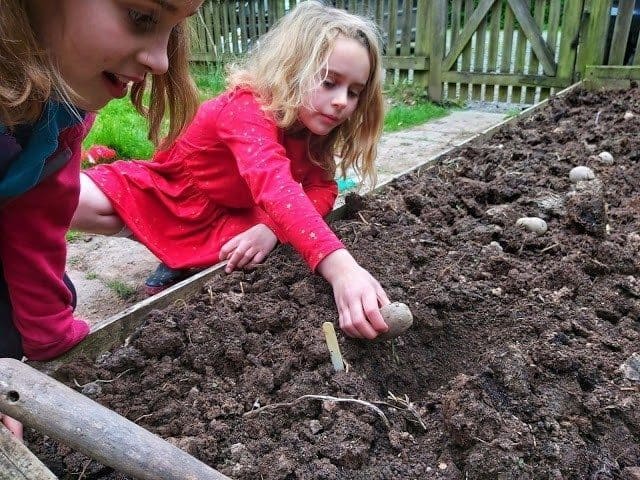 Many people think that potatoes need to be planted on Easter Sunday. This is an old wives tale! Traditionally, this was the first long weekend of the year and many people enjoyed being out in the garden for the first time. Others, we think enjoyed getting out of the kitchen and were given an important job to do! As Easter can vary each year by a huge amount, this is definitely not a reliable date. The storage facilities now mean that your potatoes can be sent out in perfect condition all throughout May and into June. Requiring 100 days for early and about 120 for main crops, a later planting simply means a later harvest. We are glad other people agree! See our FAQ for more details.

Kevin from English Homestead had fun with his girls planting Pink Gypsy, Salad Blue, Heidi Red and Highland Burgundy Red and then did a great Q&A with us. We love when bloggers are as excited about potatoes as we are! This is a great blog to follow and you can certainly say his kids are living the life most can only dream of!

Please pop over to our facebook to say hi, ask a question, or to upload some pictures of your potato growing experience.